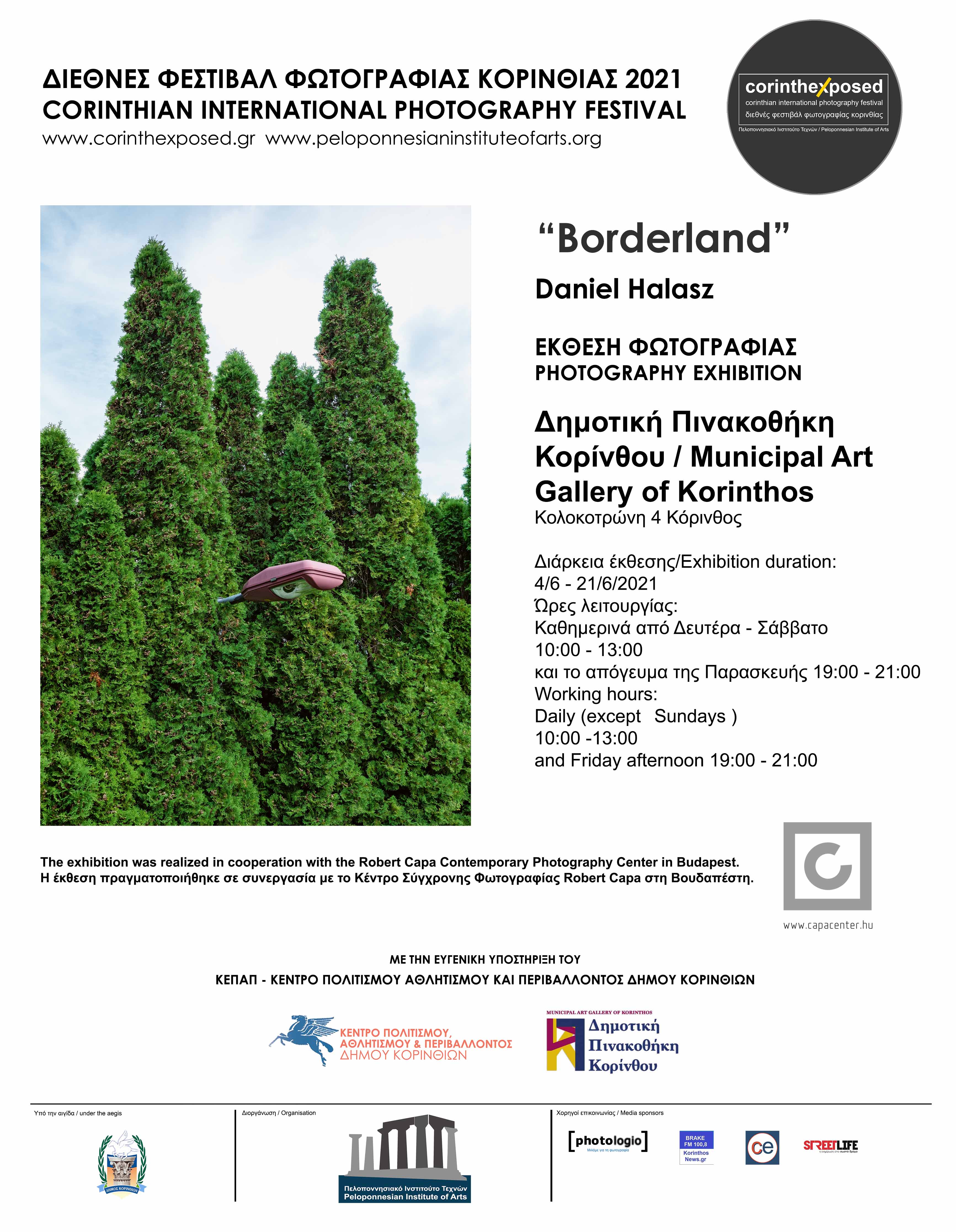 From Friday, June 4, the Municipal Gallery of Corinth presents the solo photo exhibition of the winner of the "The Fellowship-winner of Capa Grand Prize Hungary 2020 Daniel Halasz from Hungary entitled: Borderland.

The exhibition is organized in collaboration with the Center for Culture, Sports and Environment, the Municipal Gallery of Corinth, the Corinth Photography Festival 2021, the Robert Capa Center for Contemporary Photography in Budapest and the Peloponnesian Institute of Arts.

We would like to inform you that in all the places where the actions of the festival are hosted, all the security measures set by the competent Ministries are observed to prevent the spread of Covid 19.

The photo is silent. It is not accompanied by a soundtrack when it affects our senses. But a healthy brain has some synesthetic ability. It can hear the sight. Like the hearing-impaired who learns to read by mouth. He sees a dog with an open mouth showing its teeth and hears a bark. The images in DánielHalász's series Borderland are ambient recordings that do not contain a soundtrack that co-exists next to an image, but the sounds are encoded in the pixels themselves. Composers are also often inspired by ambient sound recordings, endowing the on-site recordings and atmosphere with a strong mental or emotional charge. DánielHalász is a photographer with such an attitude, and in this series he walks around the 150 km long administrative border of Budapest.

Whether this comes down to not only composing but also poetry is another matter. Imagine Budapest as a puddle that dries from its edges to its center. Its center holds some density until the last moment, droplets fleeing there, fearing disappearance. The escape of the rim. The cold places of the periphery compress the center into a smaller and smaller area like a ring. This understylized language is a poetic form of speech in Halász’s images. He does not express devout and piety, he merely states. He is not pretending, but is deeply sensitive. He is consistently documenting (he continues what he started in his village series), going after phenomena with the tenacity of a forensics expert.

We rarely see human figures in these places because few people have anything to do here. According to the anthropologist Marc Augé, non-lieu are those areas to which we are not attached. We go through them, in this way they are temporary spaces, they have no identity, so one also remains anonymous in them. The spaces of Borderland are a combination of local and global, intersecting foreign and domestic, afterlife and terrestrial life, land and water, nature and the built environment.

The uncomfortable feeling of “anything can happen” swings into these spaces. A windshield crushed with a brick turns into a cobweb. The perpetrator even left the means of his atavistic rage. An abandoned car or the victim of a revenge? The brick testifies that the perpetrator did not even want to remove the trail. It is as if the border area allows for such extreme manifestations. Its uncomfortability encourages irresponsibility. This is already a land outside of civilization. An administrative boundary. Erosion forces make it easier to challenge the edges. The boundaries of my language are the boundaries of my world. But maybe what I can show is more easily absorbed. More livable, more memorable: a non-border.

cv
Daniel Halasz is currently a DLA doctorate candidate at the Moholy-Nagy University of Art and Design Budapest and a PhD researcher at LUCA School of Arts / KU Leuven, previously a lecturer in the BA and MA programmes at the Visual Arts Institute of Eszterhazy University, teaching photography. His research focuses on the inventiveness of the peripheries, on social, cultural and mental borderlands, on strategies strangers can utilize in new environments.

He graduated with an MFA Photography in 2011 at the Moholy-Nagy University of Art and Design Budapest and an MA Scandiavian Studies at the EötvösLoránd University. He also studied at the Glasgow School of Art with a scholarship. Since graduating, he participated in group exhibitions in the US, UK, Israel, Russia, Canada and Hungary. Daniel won the Google Photography Prize in 2010 and his most recent work was shortlisted for the Esterhazy Art Award 2019. He was the winner of the Budapest Photography Grant in 2019 and was a Capa Grand Prize Fellowship winner in 2020.

Under the auspices of the Municipality of Corinth.